#MondayMemories looks back at our 25th Anniversary

#MondayMemories looks back at our 25th Anniversary

Just five short years ago, we celebrated the McDowell Sonoran Conservancy’s 25th Birthday.  As a part of that celebration, we remembered some of the most significant things that happened in each of our first 25 years.   We are now approaching our 30th Birthday, and we are taking this opportunity to reflect again on our past achievements, important moments, and dear memories that rise to the surface amongst hundreds, if not thousands, of individual moments for individual people.   With reflection, gratitude inevitably comes, and we are truly grateful for nearly 30 years with each of you. Originally published in the 25th Anniversary Edition (Spring 2016) of Mountain Lines, our quarterly magazine of the McDowell Sonoran Conservancy. 1990:  Twenty-five years ago, a handful of ordinary people decided they needed to save the McDowell Mountains and its surrounding desert from development. Armed with this mission, they incorporated themselves as the McDowell Sonoran Land Trust (MSLT) on January 21, 1991. Jane Rau, one of the founding members, said their goal was “to act as an advocacy group to have the McDowell Mountains and portions of the Sonoran Desert set aside for the enjoyment of all future generations”. Another member, Chet Andrews, after investigating the patchwork of land ownership around the McDowell Mountains, came up with the idea that the City of Scottsdale should buy the land, and that negotiations with private landowners could be started to also do land exchanges. Spreading a message to “save our desert”, the MSLT succeeded in convincing the City of Scottsdale (COS) to preserve the mountains and its surrounding desert before it was too late. The COS and the MSLT worked on forging alliances with tribal governments, surrounding municipalities, Maricopa County, the State Land Department, enlightened developers, hotel operators, business people, and a large percentage of the citizens of Scottsdale. They joined the City of Scottsdale in promoting the successful passage of multiple sales taxes and revenue bonds that provided the money to buy the land. They worked at the state level to promote the signing of the Arizona Preserve Initiative into law – a law that gave the City of Scottsdale staff the tools needed to buy the land. As time went by and their membership grew, their vision grew even bolder. It broadened to include additional land to the north of the McDowell Mountains up to the border of the Tonto National Forest. This enlarged area would be a sustainable ecosystem and provide a corridor for large wildlife. As the land purchases for the Preserve accumulated, advocacy became less important and management of the Preserve came to the forefront. So, MSLT changed its name to the McDowell Sonoran Conservancy. The Conservancy began to train volunteers to steward the land and eventually signed a Memorandum of Understanding with the City of Scottsdale that outlined the Conservancy’s responsibilities in managing the Preserve. Twenty-five years after their first meeting, the Conservancy founders accomplished their goal and much more. The mindset of the people of Scottsdale became one of preservation. The McDowell Sonoran Preserve is one-third of the City of Scottsdale and the largest urban preserve in the world. It is a priceless legacy held in trust for the people forever. These ordinary people accomplished an extraordinary feat. In this commemorative issue of the Mountain Lines, you will meet some of those who helped to create our magnificent Preserve and some of the countless volunteers in the Conservancy and other organizations that have stewarded the Preserve for the past 25 years. Creating a Land Trust 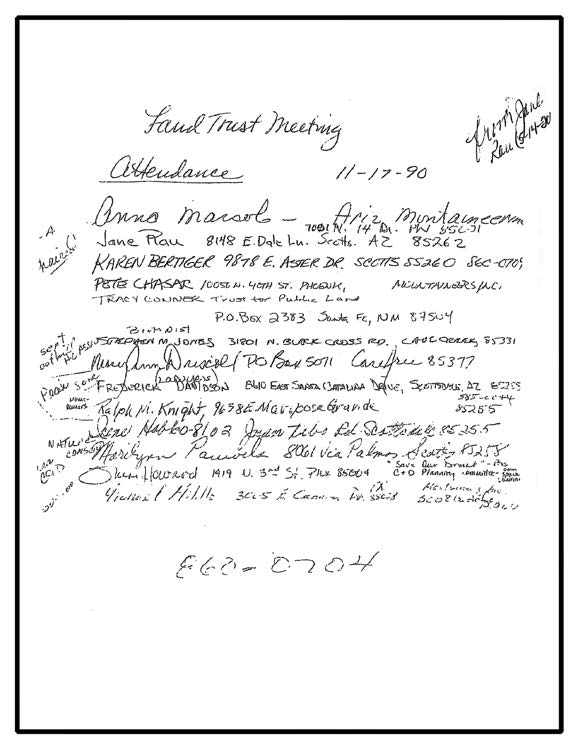 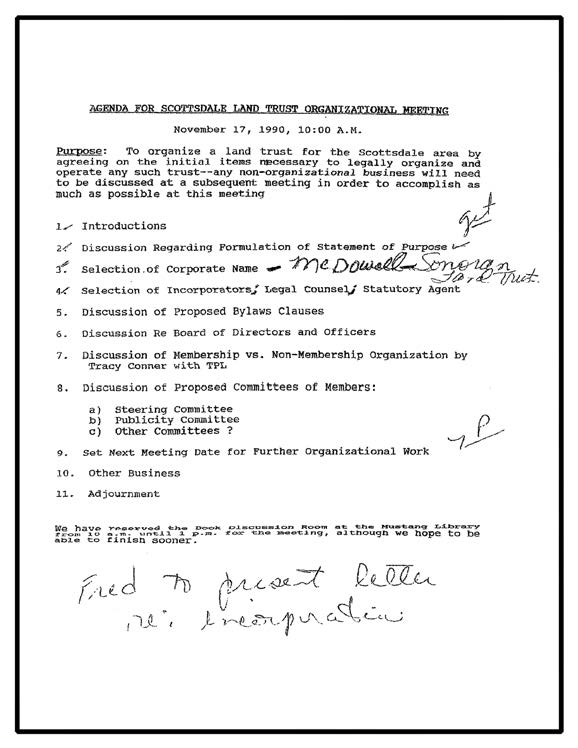 1990 witnessed urban development rapidly spreading into the Sonoran Desert and McDowell Mountains of Scottsdale. As the urban encroachment into the pristine desert escalated, concerned area citizens realized that if they did not act, this magnificent treasure could be lost forever. As Jane Rau, one of those who saw the approaching devastation said recently, “It made me almost cry to see beautiful saguaros and plants bulldozed out of the ground and destroyed.” Preservation-minded and concerned Scottsdale area residents decided to act and met on November 17 at the Mustang Library to form a land trust to preserve land in the Scottsdale area from encroaching urban development. Those attending – Anna M. Marsolo (Arizona Mountaineering member), Jane Rau, Karen Bertiger, Pete Chasar (Mountaineers, Inc. member), Tracy Conner (Trust for Public Land), Stephen M. Jones (botanist), Mary Ann Driscoll, Frederick Davidson (attorney), Ralph M. Knight, Irene Habbo, Marilynn Pauwels (Nature Conservancy), and Howard and Michael Milillo – agreed on the initial points necessary to legally organize and operate the trust. Although the atmosphere was charged and full of enthusiasm, the attendees agreed to focus only on forming the organization, and to leave other business to subsequent meetings. Moving forward with the decision to develop a land trust, the attendees selected a name, the McDowell Sonoran Land Trust, and agreed to urge protection of the McDowell Mountains from further development. 1991:  The Land Trust Incorporates

1991 was a busy year for Land Trust founders. They incorporated themselves as a legal entity, the McDowell Sonoran Land Trust, and began advocacy efforts to save the McDowell Mountains and surrounding Sonoran Desert. On January 21, Jane Rau and Karen Bertiger signed the state of Arizona incorporation documents. At its meeting on March 13, Land Trust members elected Pete Chasar as chair, Karen Bertiger as treasurer and Jane Rau as secretary. They also filled three other important positions. Sue Adams became chair of the Public Information Committee, Tom Adams became chair of the Land Selection Criteria Committee, and Marilyn Pauwels became chair of the Fund Raising Committee. Fred Davidson continued as corporate counsel. On May 20, the group received its nonprofit tax-exempt status as a 501(c)(3) corporation from the Internal Revenue Service. At this point the McDowell Sonoran Land Trust began urging the mayor and Scottsdale City Council to seriously consider preservation of the McDowell Mountains and surrounding Sonoran Desert. To encourage community support and raise public awareness, founders began to host hikes into the proposed preserve so that residents and others could see first-hand the urgency to save the land. Growing community understanding and support fueled continuing conversations with the city government and land developers to cooperatively set aside land for future generations.       1992:  Preserve Advocacy Grows 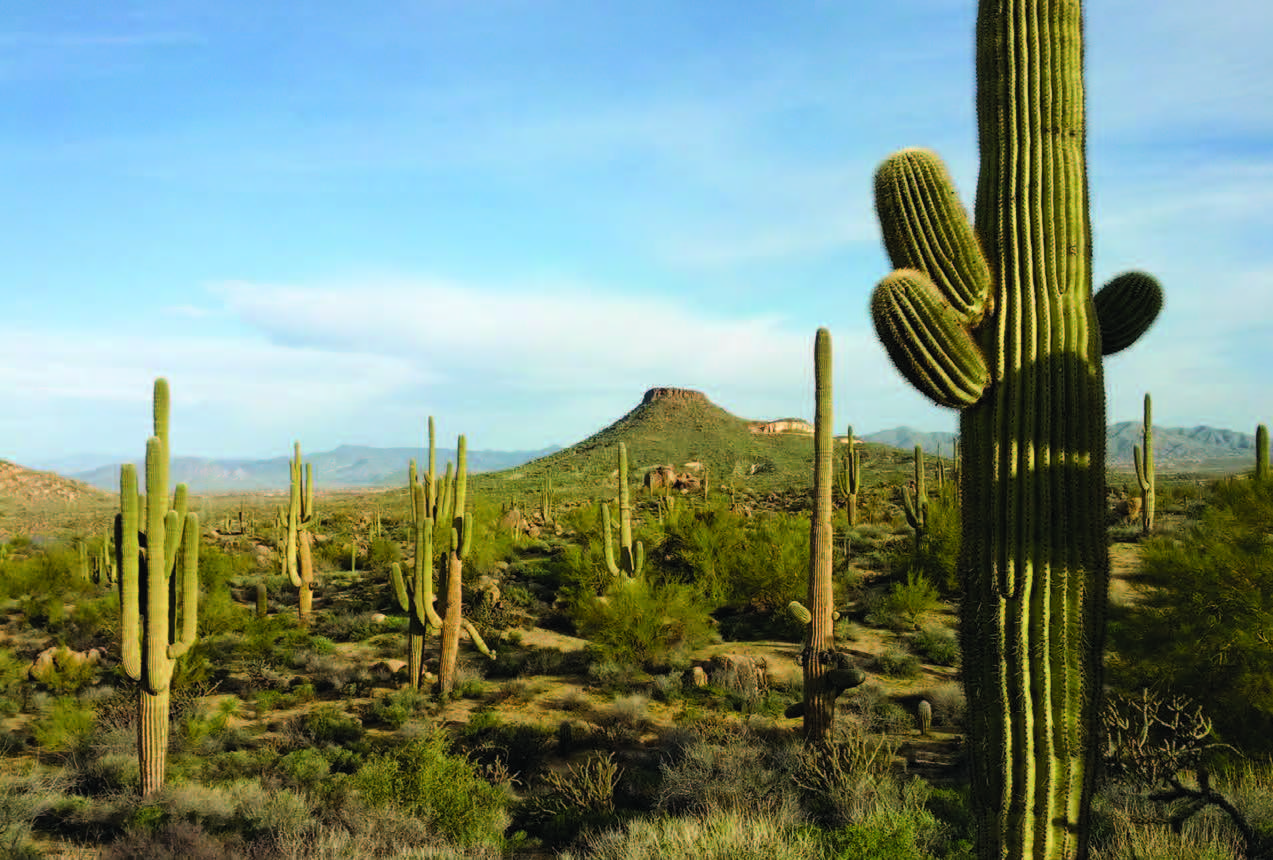 McDowell Sonoran Land Trust advocates expanded their message beyond Scottsdale City Hall during 1992. Land Trust Chair Pete Chasar and a U.S. Bureau of Land Management representative moved the effort forward by meeting with the Maricopa County Board of Supervisors and recreation officials to explore how land swaps could potentially help preserve McDowell Mountain land. All of this activity by community activists attracted the attention of the local media. Land Trust advocates and volunteers took countless reporters, columnists and photographers on hikes in the McDowell Mountains and surrounding desert. There was hardly any need to explain the need for the creation of a preserve. The magnificent Sonoran landscape with its Preserve Advocacy Grows abundant cacti, trees, and shrubs along with the resident animals stood in sharp contrast to the encroaching development. Rather than taking the adversarial tactic of pitting pro-growth and preservation efforts, volunteer and city-appointed citizen groups invited all interested parties to plan how to preserve the McDowell Mountains and surrounding Sonoran Desert. Throughout the year, new Board Members Chet Andrews, John Nichols, Steve Voss, Joyce Hall, Andrea Forman, Peter and Anne Neisser, Greg Woodall and Carla were appointed to the Land Trust board. Peter Chasar later resigned as chair and Chet Andrews took over the position.