The McDowell Sonoran Conservancy recently completed a two-year grant from the Arizona Department of Forestry and Fire Management (DFFM). The goal of this grant was to work with partners to implement a regional invasive plant removal program, based on DFFM’s interest in working with local groups within Arizona to help manage and reduce the fire risk associated with these plants. Specific objectives included creating a new volunteer program at McDowell Mountain Regional Park (MMRP) to manage fountain grass and buffelgrass and removing dispersed populations of invasive grasses in the McDowell Sonoran Preserve and in MMRP.

Working with Friends of Tonto National Forest, we created an app using ArcGIS Collector to allow any user to map areas as they conduct surveys, note the presence of targeted non-native plants, and document removal treatments. Users can also see areas that have already been surveyed or where removals have occurred, updated in real-time. To engage new volunteers, we worked with our partners to host training sessions. These included in-classroom workshops that discussed why non-native grasses and other non-native plants are a problem in the desert Southwest, how to identify these and similar native species, and how to use the Collector app. We developed a bunchgrass identification guide for people to use after the training. During the course of this grant, we held 14 in-class workshops and nine field training sessions and engaged more than 50 volunteers in our work.

To help build awareness within the community, we worked to educate the public about non-native plants and ways they could take action to protect natural areas. We gave presentations to various groups, posted flyers and signs at trailheads, talked to Preserve visitors, tabled at outreach events, and more. We partnered with the City of Scottsdale Fire Department to provide information to homeowners and communities about wildfire threats caused by non-native plants. We also worked with others to get fountain grass added to Arizona’s noxious weed list – an effort that proved successful in 2019 (buffelgrass was already on the list).

One of the most important components of invasive species management is understanding the distribution of target species in order to prioritize removal efforts. During the course of this grant, we surveyed approximately 33.6% of the Preserve and 6% of MMRP. Volunteers surveyed areas by hiking or biking trails and washes or by scouring blocks of land. All 225 miles of trails in the Preserve and 68 miles in MMRP were surveyed! As surveys were completed, we used the Collector app to identify hotspots of buffelgrass and fountain grass and prioritized removal areas based on density and ease of access. We used a combination of pulling and herbicide to remove these species. In late 2019/early 2020, six Conservancy volunteers became state-certified herbicide applicators, allowing us to cover larger areas. During the course of this grant, we removed non-native grasses from a total of 52 acres in the Preserve and 10 acres in MMRP. During 2020, we shifted some of our focus to annual species, such as globe chamomile and Sahara mustard, which are both on Arizona’s noxious weed list.

Regular monitoring is an important aspect of non-native plant control. Unfortunately, one-time removals are rarely 100% successful due to established seed banks, missed plants, etc. However, through repeat visits, missed plants and new sprouts can be removed, and the population can eventually be eradicated. During the term of this grant, the Conservancy conducted annual monitoring and re-removals of buffelgrass and fountain grass at 40 sites within the Preserve and we have seen substantial reductions within these areas.

Overall, this was a very successful project that resulted in a better understanding of the distribution of non-native plants in the region, removal of more than 100 acres of buffelgrass and fountain grass, increased collaboration among regional groups, and exciting new ways to educate and engage communities. This grant helped launch new partnerships and spearheaded regional collaboration to provide a comprehensive approach to non-native plant control, rather than piecemeal by individual areas. Through these partnerships, we are able to share knowledge and develop strategies for the future. We plan to continue working with our existing partners and seek new groups to engage in our efforts. 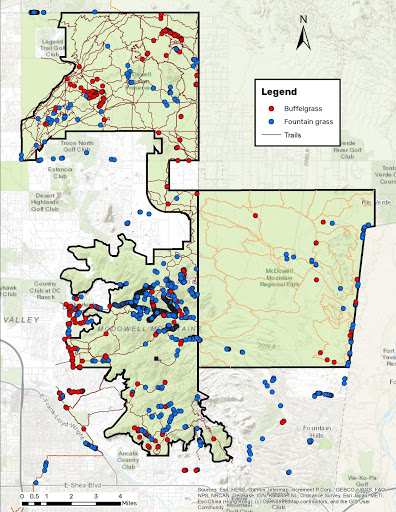