Going Batty at Dixie Mine

Going Batty at Dixie Mine

By Debbie Langenfeld, McDowell Sonoran Conservancy Parson’s Field Institute certified citizen scientist Originally published in the Fall 2017 issue of Mountain Lines Photos by Dwight Keller. It’s a hot summer night and the bats in the Dixie Mine wait for sunset to leave their cavern for their nightly excursion in search of an evening meal. But on this night their normal exit route will have a few new obstacles as they fly out. Just a quarter of a mile away, a group of researchers are preparing to disrupt the bats’ normal existence. 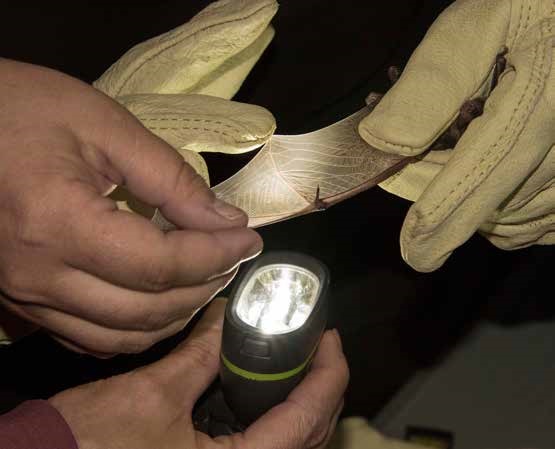 Who are these researchers and why are they at the Dixie Mine? In 2016, the McDowell Sonoran Conservancy Field Institute, in partnership with Northern Arizona University (NAU), Arizona State University (ASU), and Arizona Game and Fish Department (AZGFD), initiated a study about bats in the mine adjacent to Scottsdale’s McDowell Sonoran Preserve. The purpose of the ongoing study is to understand bat diversity and habitat requirements. The Dixie Mine area was selected for the study’s initial focus because data exists from previous bat studies carried out there in the 1990s. “The importance of this roosting site cannot be understated,” according to Marianne Moore, ASU Assistant Professor. “There are very few easily accessible sites in Arizona where numerous bats can be monitored.” 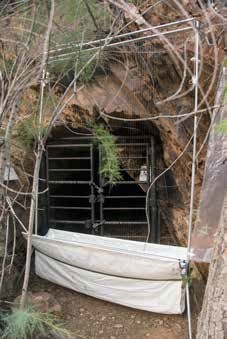 The goal of the study is to survey bats and determine their habitat use within the Dixie Mine and its surrounding area. Several surveys were conducted throughout the summer in 2016 and 2017 as summer is when species richness and abundance of individuals is greatest. Three methods were employed to collect data—exit counts, ultrasonic monitoring, and harp trapping.   Experienced researchers and Conservancy Field Institute citizen scientists trained in relevant techniques initially performed the exit counts. Observers, using night vision equipment and infrared lights, sat quietly in front of the mine entrance and manually counted bats as they left the mine. In 2017, an infrared video camera replaced the human observers to minimize disruptions. Also, an ultrasonic monitoring detector, placed at a quiet location near the mine site, recorded bat echolocation calls. Monitoring protocol dictated starting the count and acoustic recordings thirty minutes prior to sunset and continuing for two hours after sunset. Moore, a qualified bat handler, oversaw the captures. A harp trap, the gentlest and safest known bat-trapping device, was set up at the mine entrance. Once captured, species, sex, relative age (juvenile, adult), and reproductive status were recorded. Bats were weighed to the nearest gram and the length of the forearm was measured. Wing damage and any other signs of injury or health status were noted. The bats were then safely released to proceed with their nightly hunt. During the last survey, samples were collected to test for presence of the white-nose syndrome fungus,Pseudogymnoascus destructans, on bats by gently wiping a swab across the wing and muzzle.

Overhead sightings and acoustic detection indicate that there is bat activity around the Dixie Mine and throughout the wash leading to the mine. Results of multiple exit counts at the mine entrance suggest it is a viable roosting site. Three species have been captured so far—Pale Townsend’s big-eared bat (Corynorhinus townsendii pallescens), cave myotis (Myotis velifer) and canyon bat (Parastrellus hesperus), also known as western pipistrelle. With few known roosting sites for Pale Townsend’s big-eared bats in Arizona, this site is an extremely important indicator for population stability. There are still many questions to be answered. Which species use the mine, and for what purpose? Is it a maternity roost, interim roost, night roost, or hibernacula (a shelter for a hibernating bat)? What can we do to protect and enhance the habitat? Which direction should future research take? Ultimately, the research will result in a bat monitoring and management plan to guide bat research, management, and conservation efforts in the McDowell Mountains. So, stay tuned!